Educare has been going really well the first month. We have collected around 40 applications so far from children who are coming for classes. Some of them are regular, but some of them aren’t. Our teachers and staff have also made sure that every child is looked after and frequent communications with the guardians are maintained. All the parents are very happy with us as we are also visiting the community and keeping a good relationship with all of them. We have already started to see changes and improvement in some of the children from Day 1.

We have started teaching them basics on Alphabets and Hindi language, and Mathematics too. There are children of ages 3 up till 10. Though there are big 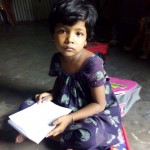 and small children, they are all in the same level of education as the older children still do not know basics. We also include some games and time of art and craft with the studies so that they can have some fun. That’s what they love the most too.

This is the story of one of our boys.

Sudeep Das was born and brought up in a Hindu family in Basanti Colony. Sudeep is seven years old. He lives with his parents and one sister. His father works as Rickshaw driver and mother works as a housemaid.

He used to be very mischievous and would spend most of his time playing and out of the house. Education is not a priority for his parents because of their situation and they earn very little to support him to go to school. He is forced to make some money to live. Being a seven year old boy, where he should be studying or playing with other children, he goes to other neighbouring houses to help them fill water in large containers, carries them to their houses and earn Rs 100 a day. With this, he buys himself chocolates and also helps his parents.

But now he is coming to Educare and he has started to study. His parents are also pleased that he is beginning to pay some attention to his studies. We are encouraging him to study well and learn more about hygiene. From the last week we are starting to see an improvement in him. 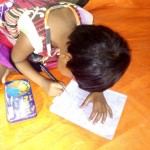 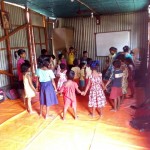 “The key point is that kingdom people are generous people who seek the wellbeing of those who I’ll treat them and make demands on their resources. The reason for our existence is to do good and bless, to give of ourselves to others, as our Lord give of himself for us.” Demi Hughes “POWER AND POVERTY – DIVINE AND HUMAN RULE IN A WORLD OF NEED.”

Don’t forget to get your tickets for this wonderful event. Each year loyal NACS supporter Fay Menzies and her hard working team hold a fundraiser to support the work in India. An afternoon tea in Lawnton on the 4th of June from 2pm – 4pm. Lots of good food and fun entertainment & raffles as well as an update on NACS work in India. ALL WELCOME.
WHEN: Saturday 4th June 2016 2-4 pm
WHERE: Cnr of Elis Street and Todd’s Road, Lawnton.